Celebrate French Quarter Festival in the Heart of it All

Celebrate French Quarter Festival 2017 in the Heart of it All 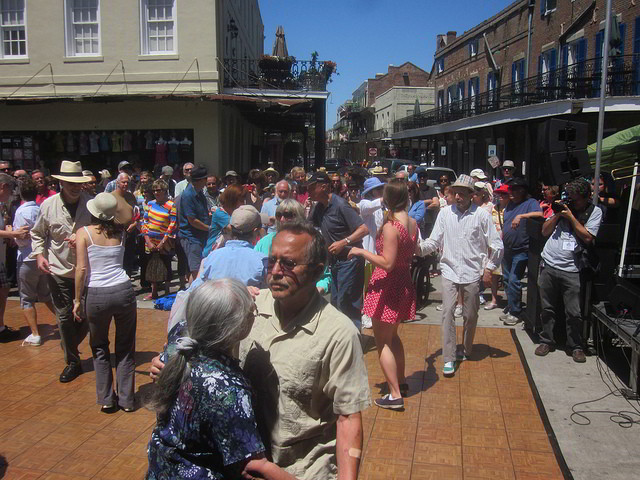 This free festival features more than 1,700 local Louisiana musicians across 20+ stages peppered through the French Quarter and Woldenberg Park at the Mississippi riverfront.

More than 1,700 musicians will perform at this year’s French Quarter Fest. (Photo by Aris Vrakas via Flickr)

Come Hungry and Ready To Indulge

As is so common with New Orleans, music is a huge component of the festival – but wherever there’s music, there’s food. French Quarter Fest has an impressive list of food vendors, offering up traditional New Orleans fare like barbecue shrimp, cochon de lait po-boys, and plenty of crawfish. The sounds and smells of this festival are simply intoxicating, and our location on Decatur Street puts us in the center of the action.

Some of the city’s most iconic restaurants have a presence during French Quarter Fest. Head to the foot booths in Jackson Square to sample Antoine’s Oysters Bonne Femme and Shrimp Regua or try the Crawfish Louise from Court of Two Sisters.

If a po-boy is more your speed, there are plenty of options available. Dickie Brennan’s Bourbon House is offering a Prime Beef Debris Po-Boy and a BBQ Shrimp Po-Boy. Galatoire’s, another iconic New Orleans Creole restaurant, is serving gluten-free Shrimp Remoulade in addition to a Fried Shrimp “BLT” Po-Boy. 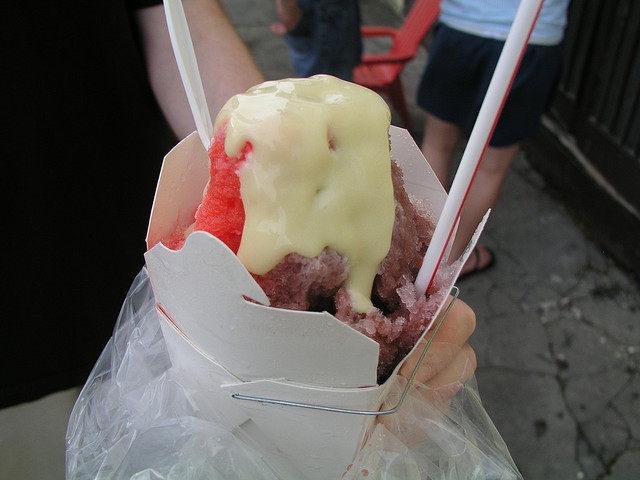 The Plum Street Snoballs stand at French Quarter Fest will satisfy your sweet tooth. (Photo by Tim Gonzalez via Flickr)

Whether you’re craving White Chocolate Kingcake Bread Pudding (from Haydel’s Bakery), or a cool Café au Lait Ice Cream (from Quintin’s Ice Cream), practically any dessert you can think of is available at French Quarter Fest.

You can also get snowballs – a New Orleans classic – from Plum Street Snoballs with your choice of flavor. For a quintessentially New Orleans experience we suggest the Nectar Cream flavor.

In addition to food, French Quarter Fest offers beverages like wine, cocktails, and daiquiris. You’ll also find a tip jar at every beverage stand. Proceeds from the tip jars are split amongst the festival’s musicians, so leave a little lagniappe to thank them for the music. Check out the complete list of food vendors here!

Our on-site restaurant, Latitude 29, has creative menu and tiki drink items in a fun and festive setting – the perfect way to cool off and relax after a day at the festival. Bonus: Latitude 29 can satisfy a variety of tastes and dietary restrictions, including gluten-free, vegetarian and vegan.

Here are a few more ways to enjoy French Quarter Fest during your stay at Bienville House:

Think Beyond the Big Stages

The festival’s largest stages along the riverfront, such as the Abita Beer Stage at Woldenberg Park and the GE Digital Big River Stage next to the Canal Street Ferry Terminal host legendary acts like Irma Thomas, Walter “Wolfman” Washington, Big Sam’s Funky Nation, The Dixie Cups and Little Freddie King.

However, some of the best entertainment takes place in other places. For example, the French Market Traditional Jazz Stage and the Chevron Cajun-Zydeco Showcase hosts free dancing lessons and live hot jazz music throughout the weekend. Le Petit Theatre du Vieux Carre also plays host to the Whitney Bank Film Festival, which will screen documentaries exploring local music and culture.

A Festival Outside Your Front Door

We’re located in the middle of the French Quarter, so there’s no need to make additional travel plans to get to French Quarter Fest. Simply walk out the door!

We’re located on Decatur Street, which offers a direct route to Jackson Square. If you need directions to a particular stage, our concierge will be more than happy to help!

Spring festival season is a great time to enjoy the French Quarter, but every day is a celebration when you’re staying in the middle of New Orleans’ oldest neighborhood. Book now for an unforgettable trip any time of the year.