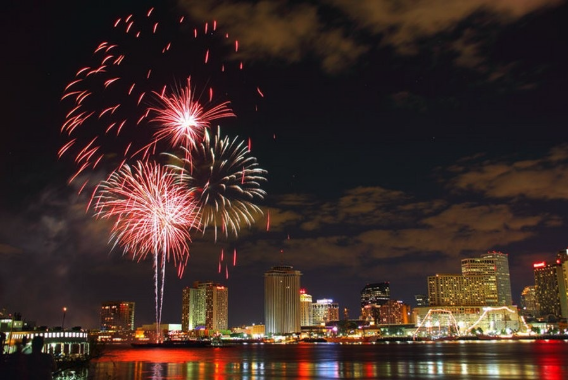 From Jackson Square to the Creole Queen, it’s time to party like it’s 2019! Before the magnificent fireworks show over the Mississippi River, join revelers at one of the many New Year’s Eve celebrations taking place on December 31st, all just steps from our French Quarter hotel. 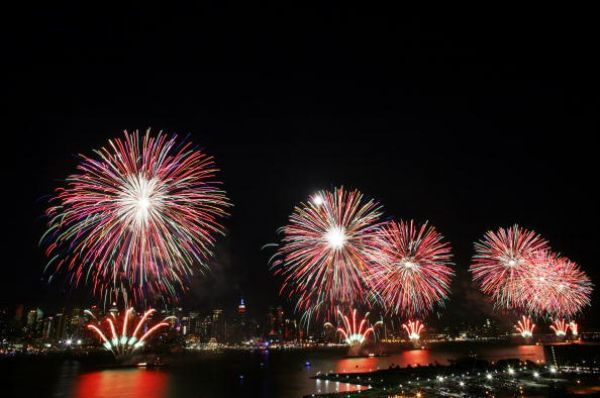 There’s no better way to experience the dazzling fireworks show over the Mississippi River than to be on the river yourself! Both the Steamboat Natchez and Creole Queen will be operating from the docks of New Orleans before, during, and shortly after the fireworks celebrations.

Dress in your holiday best and enjoy scrumptious hors d’oeuvres, open bar, champagne toast, and a DJ. Not to mention the breathtaking city views. It’s the ultimate New Year’s in New Orleans celebration.

New York may have the most well-known ball drop, but New Orleans likes to put a funky twist on things with a 25-foot fleur-de-lis drop on the roof of Jax Brewery. The annual party at Jax Brewery is always a sell-out crowd favorite, featuring live music, aerial artists and more.

For the third year in a row, the celebration gets a special spotlight with Dick Clark’s Rockin’ New Year’s Eve broadcasting live from Jackson Square. Come join the televised fun as the fleur-de-lis drops and fireworks soar over the Mississippi River.

After the show, follow the crowds to Bourbon Street and keep the party going long after midnight! 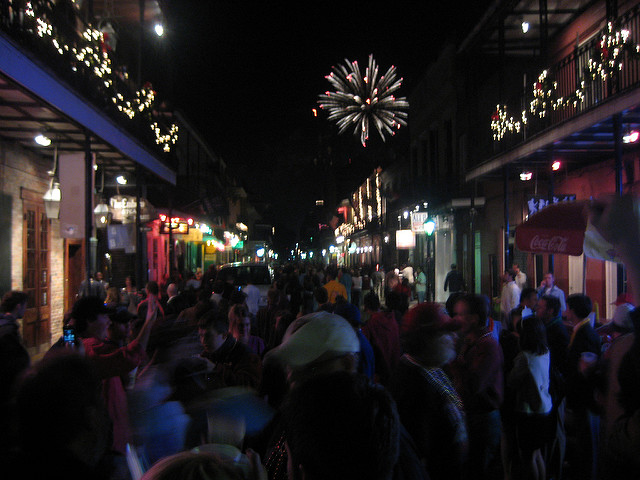 Watch the New Year’s Eve fireworks from the streets of the French Quarter. (Photo jephilip via Flickr)

There’s no better way to ring in 2019 than with a night of dancing, and plenty of New Orleans’ iconic venues have must-see shows planned for New Year’s Eve.

Hometown rockers The Revivalists will be performing with NOLA’s favorite soulful group, Tank & the Bangs, at Mardi Gras World for a festive New Year’s show. At Preservation Hall, you can welcome the new year with the Preservation Hall-Stars at their annual Hall Lang Syne, an exclusive and intimate performance full of classic New Orleans jazz.

Or you can head to the Big Night New Orleans Gala at the Hyatt Regency Hotel, where a jam-packed lineup of bands, DJs, and stars will be kicking off the new year in style!

College football fans are drawn to New Orleans each year for the Allstate Sugar Bowl, an annual showdown every New Year’s weekend.

Held on January 1, 2019, the Big 12’s Texas Longhorns and the Georgia Bulldogs from the SEC will go head-to-head in the Mercedes-Benz Superdome – but not before the fans get plenty of time to party.

The Allstate Fan Fest is a free celebration that starts on Sunday, December 30th, featuring pep rallies, football-themed activities, and family fun. The festivities all lead to a free New Year’s Eve concert, and then game day kickoff starts the very next day.

There’s no better place to be in the heart of all of the action than Bienville House Hotel. Located at the center of downtown in the French Quarter, you’ll be steps away from all of your favorite attractions and New Year’s Eve activities. Book your room today!