The History of the Mardi Gras King Cake in New Orleans

The History of the Mardi Gras King Cake 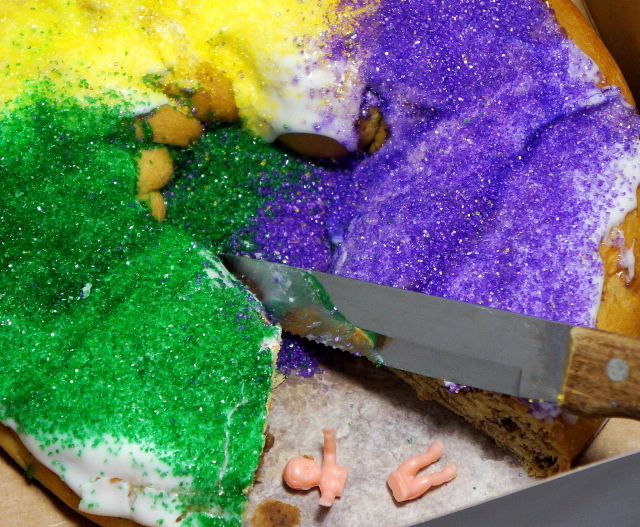 If you’ve ever been in New Orleans during that oh-so-festive time of year we like to call Carnival season (leading up to Mardi Gras), you’ve probably experienced the joy of tasting a king cake. 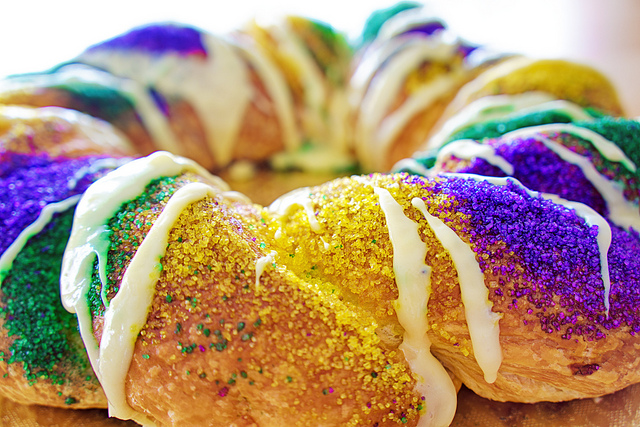 King cake is the defining treat of Carnival season. (Photo by Eric Wagner via Flickr)

Searching for one of the biggest signs it’s Carnival season in New Orleans? Walk into any bakery or grocery store, and you’ll find king cake — a delicious purple, green, and gold braided cinnamon cake.

While many follow the custom of eating these treats for Mardi Gras, they are often unaware of why and how this custom came to be. Let us help:

History of the Mardi Gras King Cake in New Orleans

Carnival season in New Orleans begins on January 6 or the Twelfth Night after Christmas each year. As told by the Christian faith, the Twelfth Night is referred to as the Feast of the Epiphany, and celebrates the coming of the wise men bearing gifts to the Christ Child. It represents a time of feasting and fun.

The popular custom of baking a special cake in honor of the three kings started in France, approximately 300 years ago. The French-style almond puff pastry, Galette des Rois, is traditionally filled with a bean rather than a plastic baby. You can taste one for yourself at New Orleans’ own La Boulangerie (4600 Magazine Street).

It is believed that French-Canadian explorer Pierre Le Moyne d’Iberville brought the traditions of Mardi Gras to southern Louisiana, but the king cake tradition itself is thought to have arrived around 1870 from France.

Over the years, the cake’s decorations have become more and more festive. At first, the cake remained just a simple ring of dough with light decoration. The basic king cake has grown to a braided dough with colored frosting and sprinkles of purple, green, and gold — the traditional colors of Mardi Gras, meaning justice (purple), power (gold), and faith (green).

Tradition dictates that whoever gets the baby has to buy the next king cake. (Photo by Bart Everson via Flickr)

Each cake comes with a small plastic baby. (Due to choking hazards, many king cakes now come with the baby on the outside, giving the buyer the option to add it themselves.)

According to custom, whoever cuts the slice of cake that has the baby in it, is king for the day — and also has to purchase the next king cake.  This process repeats until the end of Carnival season, on Mardi Gras Day, which is Tuesday, February 28, 2017 this year.

Where to Find King Cake Near Our Hotel

Pastry chefs have gotten creative with their king cakes in recent years, with versions ranging from the traditional to those filled with fruit, cream cheese, and more extravagant fillings. We recommend heading to Sucre on Conti Street to try their famous king cake and other creative versions, like their king cake macaroons. You can also visit the Rouses Supermarket on Royal Street to pick up an affordable (and more traditional!) whole king cake.