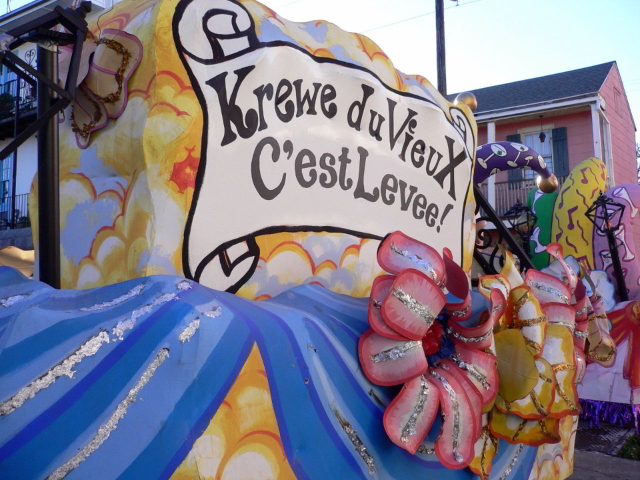 With enough adult themes to make you blush, Krewe du Vieux is a fun (and funny) satirical parade that is a fan favorite year after year. It’s also one of the few parades that has a downtown route — one that goes right past our French Quarter hotel.

Learn more about this delightfully raunchy krewe below, and be sure to watch their parade on Saturday, February 11, 2017 at 6:30 p.m. Trust us: you’ll want to grab a tropical cocktail at Latitude 29 before you go for some liquid courage.

Krewe du Vieux is the traditional kickoff of the Mardi Gras parade season in New Orleans. (Photo by Maitri via Flickr)

As a favorite parade among locals, this year Krewe du Vieux is paying homage to local celebrity Bunny Matthews. The noted cartoonist and music journalist publicly shared his battle with brain cancer in 2015, from which he has now largely recovered. Bunny’s reign as monarch is sure to be one of the highlights of the parade.

The other highlight, of course, is the scathing satire scattered throughout Krewe du Vieux and its 17 sub-krewes. Rather than throw out predictable items like beads or cups, Krewe du Vieux peppers in surprising throws from plastic cockroaches to NSFW tattoos: it’s perfectly on brand with their envelope-pushing approach.

The raucous parade will begin in the Marigny at Franklin and Royal Street, and roll through the French Quarter. From there, it continues on through the Central Business District.

Why stop at just one satirical parade when you can have two? Krewedelusion is an ideal follow-up to Krewe du Vieux, carrying on the themes of raunchy satire and lampooning.

Although krewedelusion keeps its theme secret every year, it will likely include floats that skewer politicians, pop culture figures, and more. This will be Delusion’s 8th time parading, and they’re making Carnival history this year by being the first Krewe to parade without a monarch.

Ready to plan your trip to New Orleans for Krewe du Vieux? Be sure to book your room early, as our hotel fills up quickly during Carnival season.

To learn more about what to expect during your first Mardi Gras, read our blog post offering tips on what to know and what to pack.