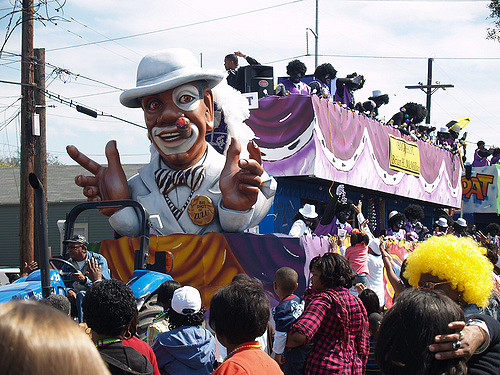 If you’ve never been to New Orleans during Mardi Gras, you’re missing out on the experience of a lifetime! While Carnival is celebrated throughout the world in Europe, Brazil and the Caribbean, the Crescent City’s take on Mardi Gras offers uniquely NOLA traditions and festivities.

Read on to learn what to expect and what to pack.

The Big Shot float is an iconic part of the Zulu parade on Fat Tuesday. (Photo by Bart Everson via Flickr)

What is Mardi Gras?

Mardi Gras is French for “Fat Tuesday,” a term referring to the last night of eating before the ritual fasting of the Lenten season, which begins on Ash Wednesday.

In New Orleans, Mardi Gras is an extravagant celebration where locals and visitors come together to enjoy parades, eat king cake and celebrate with family and friends.

The annual date of Mardi Gras is determined by when Easter falls, and Mardi Gras 2017 will take place on Tuesday, February 28.

Carnival season officially kicks off every year on Twelfth Night, or January 6, but the party doesn’t really get started in earnest until Saturday, February 11, 2017, when Krewe du Vieux and krewedelusion parade through the French Quarter, just a few blocks from our hotel. These parades don’t feature the huge floats commonly associated with many of the other parades (the narrow streets of the French Quarter prohibit it), but they offer a bawdy way to start the festivities.

The following weekend offers a handful of parades, including the sci-fi themed Krewe of Chewbacchus and the Mardi Gras parade for dogs: Krewe of Barkus. Then on Wednesday, February 22, the daily barrage of parades and celebration begins along the traditional Uptown New Orleans parade route.

The majority of Mardi Gras visitors will plan their trip sometime during this weekend, as there is a never-ending list of things to do and see during this time. View the full Mardi Gras parade schedule, complete with information on each Mardi Gras Krewe and parade routes. 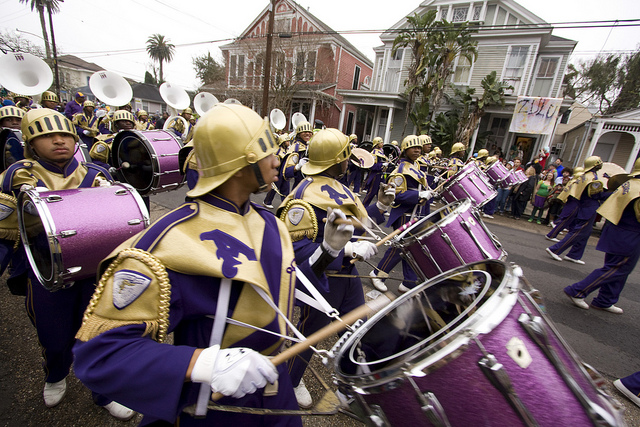 High school marching bands are a mainstay at Mardi Gras parades, and the St. Augustine High School “Marching 100” is always a crowd favorite. (Photo by Derek Bridges via Flickr)

If you’ve never experienced Mardi Gras in New Orleans before, there are a few things you’ll want to know before you arrive.

Mardi Gras is the busiest time of year in New Orleans, for locals and tourists alike, so you’ll need to plan your travel and book your hotel room in advance.

Mardi Gras is a holiday, so there is no “Official” Mardi Gras or one right way to experience it. There’s no admission charge or fee to view the parades, though some sections of the parade routes have private viewing stands with tickets available for purchase.

Many local families watch the parades from the traditional St. Charles parade route uptown. If you’re coming with kids, we recommend staking out a spot in this family-friendly area (which stretches for a couple of miles). You can also watch the parades roll into our downtown neighborhood; most parades finish up by turning down Canal Street, just a few blocks from our hotel.

If you’re driving in to New Orleans from out of town, we recommend avoiding moving your car once you’re here. Many streets are blocked due to parades and parking is extremely difficult. Explore our recommendations for local transportation.

What to Pack for Mardi Gras

The weather in New Orleans during this time of year is notoriously unpredictable, ranging from cold and rainy to warm, spring-like temperatures. We recommend packing layers, and no matter what, bring comfortable shoes! You’ll be standing to watch the parades and walking a lot during this festive celebration.

You can also expect to catch plenty of beads and Mardi Gras throws, so try to avoid carrying a large backpack or purse during your excursions unless you plan to fill it with what you catch. (Fanny packs may not be the trendiest accessory, but they can sure be handy during Mardi Gras!)

If you really want to get into the spirit of Mardi Gras, bring a costume or plan to acquire a few funky wigs or costume accessories once you’re in town. You can catch the most elaborate costumes on Fat Tuesday at the Bourbon Street Awards.

Book Your Room for Mardi Gras!

Mardi Gras is quickly approaching and if you’ve celebrated with us before, you know Bienville House is the perfect French Quarter hotel for your celebration!

Take just a few steps outside of our doors, and you will be fully immersed in all of the Mardi Gras parades, events, and festive Carnival fun surrounding this extravagant holiday in New Orleans. Book your stay at Bienville House Hotel this Mardi Gras.