New Orleans Mardi Gras Parade Schedule: Where to Go and What to See

Mardi Gras Parade Schedule: Where to Go and What to See 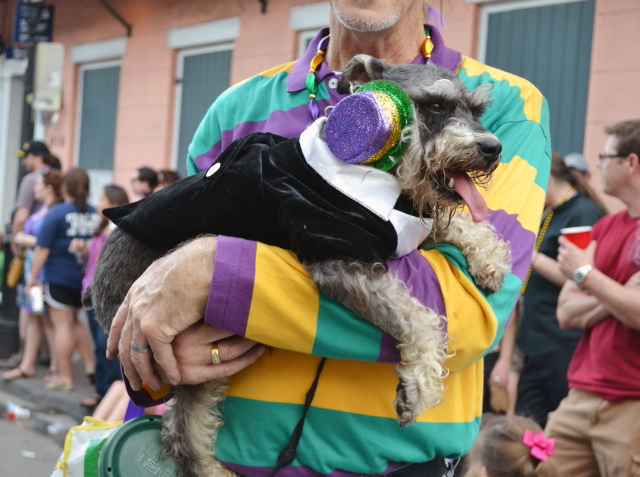 Mardi Gras may technically be a single holiday, but Carnival season is packed with weeks of partying and parades. Even if you won’t be here on Fat Tuesday (February 28, 2017), there’s still plenty to enjoy leading up to the big day.

Grab a slice of king cake (try a classic from Haydel’s Bakery or Manny Randazzo or enjoy a modern twist like the apple and goat cheese version from Cake Café) and map out your Carnival plans based on our New Orleans Mardi Gras parade schedule below.

Krewe du Vieux parades through the French Quarter at 6:30 p.m. Expect wild satire and political commentary from this gloriously louche krewe – not to mention some of the best brass bands you’ll find during Carnival. Krewe Delusion, a new kid in the school of scathing satire, rolls in the Quarter directly after Krewe du Vieux. Head to our on-site restaurant Latitude 29 to get you in the Carnival spirit prior to the parades: drinks like the creamy and exotic Pontchartrain Pearl Diver have a distinctly New Orleans feel.

Uptown hosts two parades: Krewe of Oshun and Krewe of Cleopatra, which was the first all-female krewe to parade on the traditional Uptown route. In the French Quarter, Krewe of Cork (as in wine cork) rolls at 3:00 p.m. – we can’t think of any occasion that is more appropriate for sipping vino at the Carousel Bar at our sister property, Hotel Monteleone.

Starting at 1:00 p.m., five krewes will roll down St. Charles in Uptown, beginning with Krewe of Pontchartrain and culminating in Krewe of Pygmalion, set to roll at 6:15 p.m. You’ll catch plenty of throws like beads and doubloons, plus some TBD treats: the Krewe of Sparta brings a top-secret mystery throw each year. In the Marigny, the micro-krewe ‘tit Rex and the sci-fi themed Krewe of Chewbacchus roll at 5:00 and 7:00 p.m., respectively.

Dog lovers, take note: the Krewe of Barkus rolls in the French Quarter at 2:00 p.m. With the theme of Pirates of the Crescent City: Barkus Tells Tales of Jean Lafleabag, the krewe brings plenty of pups to the streets of New Orleans. Four parades roll in Uptown, starting with the Krewe of Femme Fatale at 11:00 a.m. on Magazine Street.

The Krewe of Druids and Krewe of Nyx parade down St. Charles and Magazine streets, respectively. Nyx is one of the newest krewes (founded in 2012), but this all-female krewe boasts a robust membership – last year, Nyx paraded Uptown with more than 2,200 members.

Krewe of Muses rolls at 6:30 p.m. in Uptown – do your best to catch a glittering shoe, one of the most popular throws of the whole Carnival season. Prior to Muses, attendees can watch the Knights of Babylon and the Knights of Chaos. Muses is a favorite at Bienville House!

A trio of krewes light up Uptown on Friday night. The Krewe of Hermes kicks things off at 6:00 p.m. with their white horse and a group of more than 700 riders. Krewe d’ Etat and Krewe of Morpheus follow.

Only one krewe rolls through Mid-City throughout Carnival, and it’s worth staking out a good spot on the parade route to see it. The Krewe of Endymion parades down Canal Street towards the French Quarter beginning at 4:15 p.m. If you need to get your parade fix earlier in the day, fret not: the Krewe of Iris (the first and oldest all-female krewe) and Krewe of Tucks parade at 11:00 a.m. and 12:00 p.m. along the Uptown route.

Krewe of Bacchus is the one to see in Uptown at 5:15 p.m. Bacchus himself is usually portrayed by a celebrity guest – past Bacchuses have included William Shatner, Dick Clark, and, more recently, Hugh Laurie and John C. Reilly. In 2017, the parade will be led by actor Jim Caviezel as Bacchus. Other krewes rolling in Uptown that day are Okeanos, Mid-City, and Thoth.

Major krewes Proteus and Orpheus parade through Uptown at 5:15 p.m. and 6:00 p.m., respectively. Proteus, founded in 1882, is the second-oldest krewe in Carnival history, while Orpheus, founded in 1993, counts Harry Connick, Jr. and his father, Harry Connick, as founding members. Expect celebrity guests at Orpheus – this year will feature the entire cast of the Emmy-nominated FOX sitcom The Last Man on Earth plus actors Jimmi Simpson and Evan Rachel Wood from HBO’s Westworld. 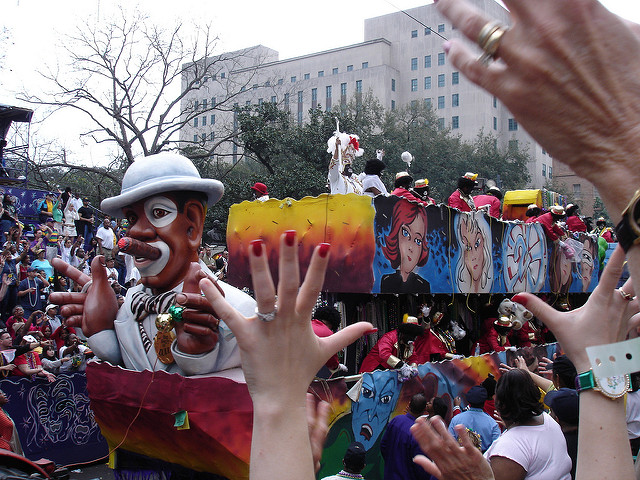 The Carnival season culminates on Fat Tuesday when the Krewe of Zulu kicks things off. (Photo by travelbigo via Flickr)

It’s the big day! Four parades roll through Uptown starting at 8:00 a.m. with the krewes of Zulu, Rex, Elks Orleans, and Crescent City. You’ll find celebrations throughout the city (look for costumed revelers throughout our French Quarter neighborhood), plus festive decorations perfect for a photo op at our own hotel.

Where To Stay For Mardi Gras

Our French Quarter hotel offers the perfect headquarters for your Mardi Gras vacation. Walk just a few short blocks to watch the parades on Canal Street, or stroll through the French Quarter to take in the festivities. As you can see, there are plenty of opportunities to experience Carnival in New Orleans, but rooms fill up early, so book your room now!

Can’t make it this year? Plan a trip for 2018! Carnival kicks off January 6 on Twelfth Night and runs through Tuesday, February 13, 2018.