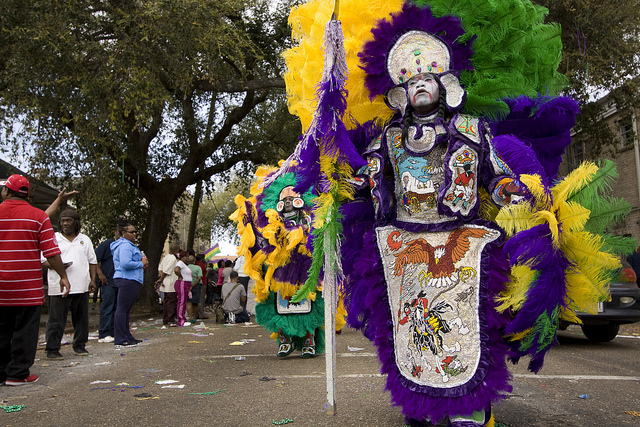 Whether you have booked a room at our hotel for this year’s Carnival season or are planning on visiting next year, it can be hard to navigate all the New Orleans Mardi Gras traditions and terms.

Learn to celebrate like a local with our handy guide – we suggest reviewing it at Latitude 29 while you sip on the Bourbon-based Paniolo. 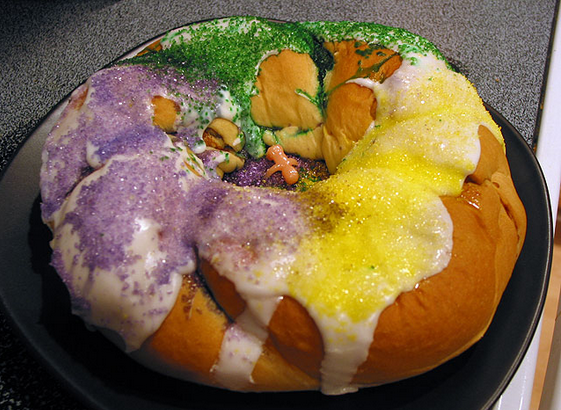 The king cake is an important Mardi Gras tradition.

The tastiest of Mardi Gras traditions, king cake comes in many forms. We mentioned some of our favorite bakeries in a previous post, but there are other fun and interesting iterations worth trying. Across the city, you’ll find king cake milkshakes, king cake lattes, king cake donuts, and more.

As for the plastic baby? The tiny toy symbolizes good luck for whomever finds it inside a slice. At Latitude 29, you’ll find a similar good luck trinket perched on their Mississippi Mermaid drink – a worthy substitute, we think, for a plastic baby!

Beads are a big part of Mardi Gras, and you’ll want to drape several around your neck to celebrate the event. The earliest Mardi Gras beads were made from glass and occasionally you can still find these vintage treasures. These days, nearly all Mardi Gras beads are made from plastic, but they’re not the only thing that the krewes throw to parade revelers. Cups, doubloons, toys, and MoonPies are all popular throws, but the most coveted throws of Carnival are handcrafted by krewe members.

The Krewe of Zulu – check out their parade schedule here – hands out decorated coconuts to a few very lucky parade watchers. The Krewe of Muses throws beautifully adorned shoes that are a crowd favorite. Keep an eye out for the glittering purses of Nyx and the annual medallion beads that most krewes throw.

You can also admire the incredible handcrafted beadwork in the costumes of the Mardi Gras Indians. Speaking of…

The Mardi Gras Indians never disclose when or where they will be seen, so seeing them on Fat Tuesday is a rare treat. (Photo by Derek Bridges via Flickr)

The Mardi Gras Indians’ annual gathering ritual is one of the lesser known traditions of Mardi Gras, but one of the most beautiful. What was once a day for settling scores between neighborhood tribes is now a day to admire one another’s craftsmanship in the elaborate, and often enormous, costumes they wear.

These groups never publish their parade times or routes in advance, but if you’re determined to see these incredible costumes up close, you can visit the Backstreet Cultural Museum or make an appointment to explore the House of Dance & Feathers.

The traditional Mardi Gras colors of purple, green and gold are far from arbitrary. In 1892, Rex, the king of Mardi Gras, chose these colors based on what they stood for. Purple represents justice, green is for faith, and gold is for power. Be on the lookout for decorations at our hotel in this important trio of colors. 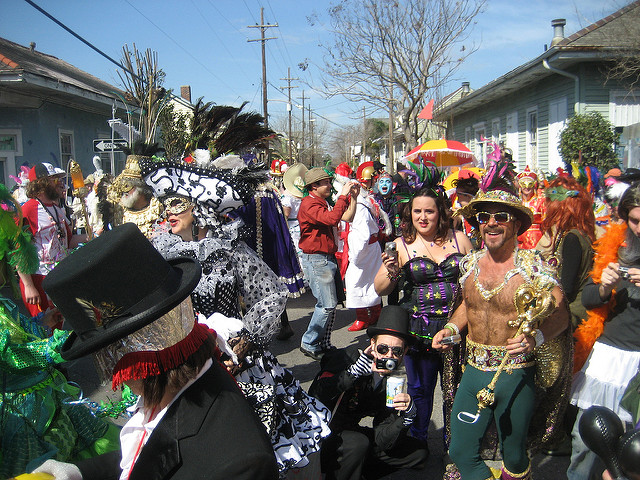 Members of the Society of St. Anne wear elaborate costumes to parade on Mardi Gras morning in the Bywater neighborhood of New Orleans.(Photo by Infrogmation via Flickr)

Mardi Gras is a time for much costumed revelry. By law, all float riders have to wear a mask while on the parade float. On Fat Tuesday, masking is legal for everyone else, and many people dress up in costume to celebrate.

We encourage you to pack or purchase a costume here in New Orleans to make the most of your Carnival experience. On Fat Tuesday, the French Quarter fills with people in costumes of all shapes and sizes. To witness the most elaborate of the bunch, head to the annual Bourbon Street Awards show, which takes place at noon on February 28, 2017 at the corner of St. Ann and Dauphine Streets.

Book now at Bienville House to experience the best of the Carnival season. Want to start planning your Mardi Gras adventure for next year now? Fat Tuesday falls on February 13, 2018.