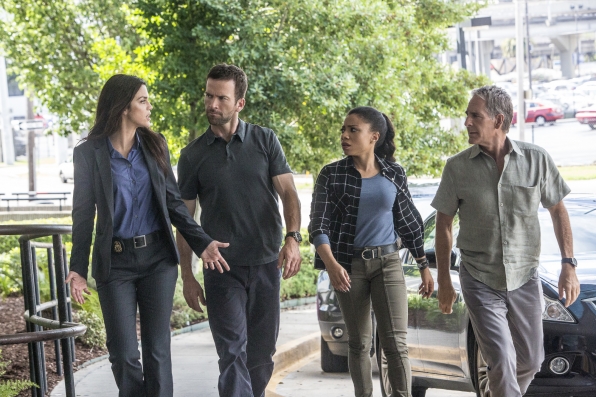 Have you noticed the back drop to many recent television shows seems to be the French Quarter, or the giant Oaks found in New Orleans parks, or even the Louisiana swamps just outside our city limits? Television shows are flocking to the Big Easy to film in a city like nowhere else in the country. Take a look at new and recent TV series filmed in New Orleans, many of which tend to be on the creepier side.

The cast of NCIS: New Orleans, filmed and set in the city. (Promotional photo via CBS)

When a show is so heavily set in New Orleans, it pretty much has to be filmed here. NCIS: New Orleans, the popular spinoff of the NCIS series, centers largely on the city and includes many of its cultural offerings, from Mardi Gras to Red Dress Run, within its episodes. The series premiered in 2014 and has quickly gained steam — its fourth season debuts this week!

Rumors swirled when the Walt Disney Co. filed paperwork to film the first season if its mysterious show, Shadows, near New Orleans. There are almost no details about this secretive project, but Star Wars fans think it may have something to do with the “Shadows of the Empire” video game produced by LucasArts and Disney. Despite all the unknowns, one thing is clear: this show has a massive budget. According to reports, season one has a budget of $42 million.

With two incredible names working behind the scenes on this family drama— Ava Duvernay and Oprah Winfrey— it’s no surprise that Queen Sugar has been a hit on the OWN Network. The show is based on a novel of the same name and chronicles the Bordelon siblings, one of whom has recently arrived in Louisiana with her teenage son following her husband’s infidelity. The family has inherited an 800-acre sugarcane farm, providing insight into the series’ name.

The Syfy network’s new supernatural show focuses on brothers and sisters who reunite after their parents die. As a horror-drama, the show features not only the figurative ghosts of damaged personal relationships but also literal ghosts that the siblings have to face in order to survive.

Another Syfy show, Superstition is not only filmed but also set just outside New Orleans. The show chronicles the Mosley family, who live in a town just outside the city that’s also the gateway for “the world’s darkest manifestations of fear.” Spooky stuff!

Though set in West Texas, the latest season of Preacher was filmed in New Orleans. Developed in part by Seth Rogan, this weird and wild dark comedy is not for the squeamish. Vampires, violent vagabonds, and a questionable former outlaw turned preacher all populate the show.

No television show has included and featured the rich and colorful history of New Orleans quite like American Horror Story: Coven. The show was based off a few notorious New Orleans natives including Madame Marie Delphine LaLaurie, voodoo priestess Marie Laveau, and the voodoo magic that was prominent back in the 1800s. Much of the season was filmed on location in New Orleans, with some shooting taking place in the famous Louisiana Swamps.

A spinoff of the highly watched and highly creepy Pretty Little Liars, New Orleans is the perfect backdrop to play the town of Ravenswood. The fictional Ravenswood is set in Pennsylvania, and the series revolved around five strangers whose lives are intertwined in by a deadly curse that plagues the town.

Another spinoff, another creepy storyline. The Originals is a CW show rooting from The Vampire Diaries. This television show is set in New Orleans (although much of it is filmed in Georgia) and centers around the tale of the world’s original vampires: the Mikaelson siblings. The show is currently in its first season.

Louisiana has quickly acclaimed the title Hollywood of the South, due to the large influx of movies and TV shows taking over the city. While exploring the city, it’s not uncommon to see a movie set on St. Charles or in the French Quarter, so come on down to New Orleans to see what all the hype is about!

Learn more about movies that have been filmed in New Orleans.