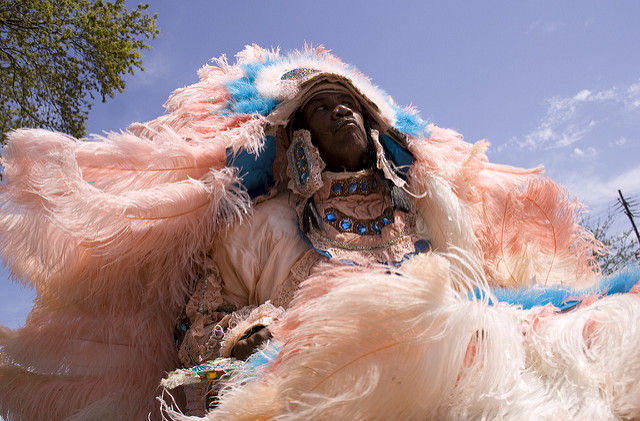 Carnival season may be behind us, but there’s still one Mardi Gras tradition you have a chance to see this month. The Mardi Gras Indians will celebrate their second-most important gathering on Super Sunday, March 19, 2017.

On Super Sunday, Mardi Gras Indians gather to show off their elaborate hand-crafted suits of beads and feathers. (Photo by Derek Bridges via Flickr)

The Mardi Gras Indians are comprised of approximately 60 “tribes” from African American neighborhoods around New Orleans. Their tradition of gathering in elaborate hand-beaded suits pays tribute to Native Americans, whom African Americans have an intertwined history with.

During the early 19th century, many runaway slaves sought shelter and protection among local indigenous groups, and later in the 19th century, as new Mardi Gras traditions began to emerge that often excluded blacks, African Americans created their own traditions, honoring their native friends.

A Gathering of “Tribes”

Super Sunday is traditionally one of the most important days of the year for Mardi Gras Indians, second only to Fat Tuesday. Local groups come together to show off their new suits, dancing and chanting in an elaborate ritual to prove who will reign supreme. (Each year, members of the community create entirely new suits, which often weigh as much as 150 pounds.)

The third Sunday in March traditionally marks Super Sunday, and the New Orleans Mardi Gras Indian Council has confirmed it will take place on March 19, 2017. The Uptown Super Sunday gathering happens at 1:00 p.m. at the corner of Washington Avenue and LaSalle Street, at A.L. Davis Park. The day’s festivities will also include a festival at the same location, beginning at 11:00 a.m. and featuring local brass bands. Meanwhile, the Tamborine and Fan organization traditionally gathers on the banks of Bayou St. John in Mid-City to celebrate Super Sunday.

This elusive New Orleans tradition is not often seen by outsiders, as Mardi Gras Indian gatherings are highly susceptible to last minute cancellations and changes in route due to weather and other factors. If you are lucky enough to catch their proceedings, it is important to be respectful of their traditions.

NOLA.com recently interviewed Mardi Gras Indians for their suggestions for visitors, which include respectfully remaining on the sidelines until any dancing and other rituals have concluded. Super Sunday is a day for the tribes to meet and greet each other, but once the ritual is complete, many members are happy to have their picture taken. (But most prefer to be asked first!) 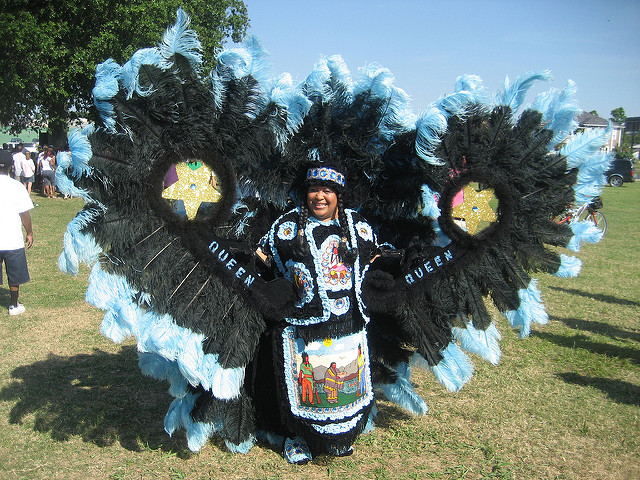 The “Downtown” Mardi Gras Indians gather near the headwaters of Bayou St. John on Super Sunday. (Photo by Infrogmation via Flickr)

Learn More About This Tradition

There are plenty of other ways to learn more about this rich tradition, no matter what time of year you visit New Orleans.

Many Mardi Gras Indians call the historic Tremé neighborhood home. It is also the location of the Backstreet Cultural Museum, which offers guided tours exploring many of the city’s African American cultural traditions, including the Mardi Gras Indians. The museum is open Tuesday through Saturday from 10:00 a.m. until 4:00 p.m.

Plan your trip to visit during Super Sunday or anytime this spring. The weather is beautiful, the festivals are plentiful and there are many historic sites to explore in our French Quarter neighborhood.